This is the first I have written since May. I did not mean to stop writing. I had many thoughts, but just never got around to putting them down. Why no posts? A variety of reasons, primarily time. As I get older I find myself less sure of myself and my ideas. I can spout anything, but it takes time to write well and with reason. I want what I write to be considered and thoughtful. That takes the time to sit down and write and rewrite.

I do not have the full energy that I used to have. Now after work or even at work between calls, I no longer take advantage of the time, what little there is. At home I sit on the couch and talk to my family or watch TV. I am big into cooking shows. in the ambulance, I simply try to stretch my legs and relax a little.

I have two jobs as I have written about previously. Sunday, Monday and Tuesday, I work the ambulance in the city from 5:30 to 17:30, although I often donâ€™t get out till 18:30. When I first started working there twenty years ago, three days in the city wore me out so much I usually spent the next day home in bed all day resting. Now, I go to my hospital job. And where years ago, in between calls, we hung out with other crews in parks or at stations, now it seems we are always on the move, if we are not doing a call, we are driving to a post, usually getting a call before we get to the post or are redirected to another post. You can not do a call for two hours, yet still spend those two hours driving in traffic from one post to the next. I am six foot eight. I used to be six nine, but life has beat me down a bit. The front of the ambulances are getting smaller and smaller faster than I am getting shorter. I had a bout of plantar fasciitis a year ago that made my first steps out of the truck excruciating, but the feet are better now. Still, I donâ€™t get out as nimbly as I used to. It is not unusual for us to respond to 10-15 calls in a shift, and from those do 8-10 transports. We get a fair number of cancels or diversions from one call to the next. We carry these pagers called Zip-its now that emit an annoying beep every time we get a priority call (you can’t put the beeper on vibrate for priorities), which can be frustrating as we try to respond on the radio to three different dispatchers (company dispatch, city dispatch, CMED dispatch) all while trying to figure out where we are going, and hit the little buttons on the Zip It to get it to shut up. Some times the Zip-Its go off while we are in the triage line at the hospital or while we are giving a report in the trauma room to a doctor. We have to call dispatch and say we canâ€™t respond to the next call because we are still on this one.

Times are hard in health care. Less money, more work. ED staffs are strapped, and so are ambulance companies. No rest for the weary. And the calls, sure there are some challenging ones, but the non-urgent ones continue to dominate. We have gone to a closest car responds rather than a more nuanced approach of maybe sending the BLS car to the intoxicated person, and leaving the medic free for another, possibly more serious call. The calls lately have been typical: 0ld person too tired to get up, young person with a chest cold too uninformed to get medical care anyway but through the 911 system. Some dogs start to look like their owners. I look like my patients sometimes. 56 year old man close to being too tired to take another step who also has a chest cold.

In my twenty years I have gone through phases of burnout, and recovered each time, so I am not worried that the true love for EMS inside me will fade away. I am lucky now that recently I have been paired at least two days a week with an old partner of mine â€“ a man of my age who has a good spirit and sense of humor. It helps when we are sent on a wait and return while BLS units are calling for medics to have someone you enjoy working with, to pass the day with. We have a good time, cracking jokes and getting laughs out of our patients, believing ourselves comedians.

Wednesdays through Fridays and certain Tuesdays (which I take off from the ambulance job to work the hospital job), I work as a clinical coordinator. The hospital is near my house and I have a great boss. I get to work on many interesting projects. Still, the longer I am there, the more projects I get put on. My to do list includes STEMI Door to Balloon Stats and agenda, stroke reports and stroke workbook, trauma data and pain management project, EBOLA talk, patient handover research projects, 12-lead Exams, coming up with a plan to curb linen loss, EMS breakfast preparation, as well as handling day to day QA, followup and fires to be put out.

I go in very early so I can get some quiet time to work before the crews start coming in. My office is in the EMS room, and I enjoy hearing the crews talk about their calls and their thoughts about the system. I try to get home while the sun is still out so I can take my six year old daughter to the park or to the pool. Of all the time I have to spare this is the most precious to me. At night, we read to each other. We just finished reading the Odyssey (kid’s version), which I was thrilled she enjoyed. She was fascinated with the idea of the gods living up on Mount Olympus, and messing with the mortals’s lives below. She also thinks Oddysseus is very clever. She liked the Trojan Horse and how he outfoxed the Cyclops. She thinks Oddysseus’s nemesis Posiden is very mean.

The last thing I have been doing with my time has been swimming. Every night on the way home from the ambulance, I stop at the pool (we have a great indoor aquatics center in our town very near my house). I was on a swim team when I was ten. Other than that I have over the years swum laps at a slow steady pace. I stumbled into a masters swim program last November in place of running (due to the plantar fasciitis) and fell in love with the workouts and the swim coaches pushing me to swim harder. One coach in particular told me I had the natural build of a swimmer and if I worked hard I could become really fast. With encouragement, I worked hard over the winter and into the spring, and managed to qualify for the World Masters Championships in my age group 55-59. I qualified in the 50 meter freestyle by 1 one hundredth of a second and in the 100 meter freestyle by 3 one hundredths of a second. Since the World Masters Championships were held in Montreal this year and Montreal is only a five hour drive from Connecticut, we decided to do a family vacation there.

It was great, although there was pressure on me as the rules of the event were if you did not surpass the qualifying time in your race, you did not get an official time. Fortunately, I managed to make it. Â In the 100 meter freestyle I finished in 1:17:45. In needed 1:18:00 to get an official result. I came in 105 of 123 who raced. Â Only 108 made the time. Â That’s me below in American flag cap.. Â They had swimmers from 97 countries there. 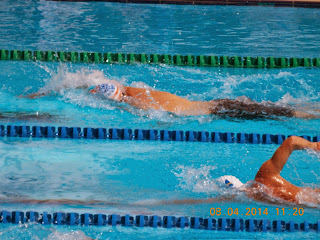 While in Montreal, I also got to sample some of the local delicacies, poutine (french fries with gravy and cheese curds) smoked meat sandwiches, horse meat, and Montreal bagels, which have sesame seeds on them and are lighter than American bagels. We also ate at several of the gourmet food trucks Montreal is famous for.

This is perhaps a bit of a tangent away from EMS, but the point is, everyone needs to step away. Swimming (and my family) are that for me. All day at work, I think about getting in the pool. I put on my cap and googles, then climb on top of the starting blocks. I take the start position, then spring (or spring at least as well as a stiff old man can) diving into the water, gliding through the clear aqua blue in streamline under the surface. I feel like all the grime of the city is being washed off me, and my soul and heart are being cleansed. An hour later I am home relaxing, laughing with my children, cooking dinner, then sitting down on the couch and resting. I like to be in bed by 9:30, so I am not too tired to do all over again the next day.

It is Saturday morning now, and the kids are eating cereal and watching cartoons. I think if there is a time for me to write weekly, this is it. If I take advantage of the time, I may be able to start posting again regularly.

In a few minutes, I am going to shout, â€œCome on kids, get your shoes on, weâ€™re going out.” We have a lot on the agenda today. Mini-golf, apple-picking, stop in the pet store to think about what we are going to get when Spike, our beta fish, dies (he has lived most of the summer, but is looking tired these days, resting on the gravel more and more rather than flashing all about) soccer in the park, ice cream, swimming at the pool, and then cookout at home. Maybe even a beer for me. I have become found of the Shock Top Belgian White (I limit myself to one. Two interferes with my sleep, three leaves me tired. I only go for 4 or beyond if I am on vacation and can sleep in or better yet, lay on the beach). Hopefully I am in bed by 9:30, my work clothes and boots laid out for my early morning rise.

Mary Baker
Where Has all the COVID Gone?
Please keep posting about what you see in your line of work. I'm very worried that testing is being restricted again, or that reporting is being altered. For example, reportedly Florida's pneumonia deaths are double normal, but COVID is plummeting. People are still dying, but they're not reporting it as COVID.
2020-05-30 13:17:45

Ray Collins
Where Has all the COVID Gone?
Third, here is a copy and paste from an email i sent to a local policymaker about the historic behavior of pandemics. In response to a request for a rapid expert consultation, the National Academy of Sciences pointed out that the ten influenza pandemics over 250 years did not display seasonality. Instead, there was a…
2020-05-30 12:14:27

Ray Collins
Memorial Day Weekend
Unacast is being used as a measure of social distancing in Austin/Travis county TX. https://www.unacast.com/covid19/social-distancing-scoreboard?view=county&fips=09003 Travis County and TX got Fs, as did Hartford county. CT had one D and the remainder Fs.
2020-05-27 05:05:49

BH
Nursing Home
Co-worker's relative is in a skilled facility near his home. To protect the patients, staff were told that if they worked in more than one facility, they had to choose. Either work just for that facility, or don't work there at all. 40% of the staff resigned immediately.
2020-05-12 04:38:01

Where Has all the COVID Gone?

Diamond In the Rough

Diamond in the Rough

Mortal Men: Paramedics on the Streets of Hartford